I’ve been collecting in person autographs for about the past five years. It is something that I am very passionate about. I do not sell my autographs, occasionally I’ll trade for players/teams I can’t get on the West Coast.  I just do this for fun and to meet ball players. I don’t expect players to sign everything I have. If they only sign one, then that’s fine with me.

Every once in a while I have an experience that is truly incredible and beyond words. Last night I had one of those experiences! May 6th was the Stockton Ports Annual Alumni Night. Unfortunately the way it works they never really know who is going to come to the event until they actually show up. Some alumni will RSVP the week of the game, but some just happen to show up.

So a good friend of mine, Jesse, and I were graphing that night and the Ports were introducing the Alumni that were there and they announced a very familiar name: Dion James.

I know Dion still lives in the Sacramento area. I sent a TTM request in October 2015. I received the cards back signed in just 2 weeks. I just had no idea he would be there.

Dion was a first round draft pick in 1980, 25th overall, by the Milwaukee Brewers. He was drafted out of McClatchy High School in Sacramento. Dion played 11 seasons in the Majors with the Brewers, Atlanta Braves, Cleveland Indians and the New York Yankees.  Dion played 124 games for the Stockton Ports in 1981 batting .304 with 43 stolen bases.

I’ve learned to always carry a ROMLB with me because you never know who is going to show up at the ballpark. We found Dion on the concourse looking at some of the graphics and banners the Ports have posted around the ballpark. We approached him and asked for his autograph. He was more than happy to do it for us.

He signed a ball for me and an autograph card for Jesse. Then he said “I have something special for you guys. Hold on a moment.” He pulled out a stack of his own cards and proceeded to give 3 cards to the 2 of us and signed them all. I took the one I wanted and Jesse got the other two. Dion shook our hands thanked us for asking him to sign and being a fan. He also commented to us, “you made my day.” I said to him, ” Mr. James, you made my day!” 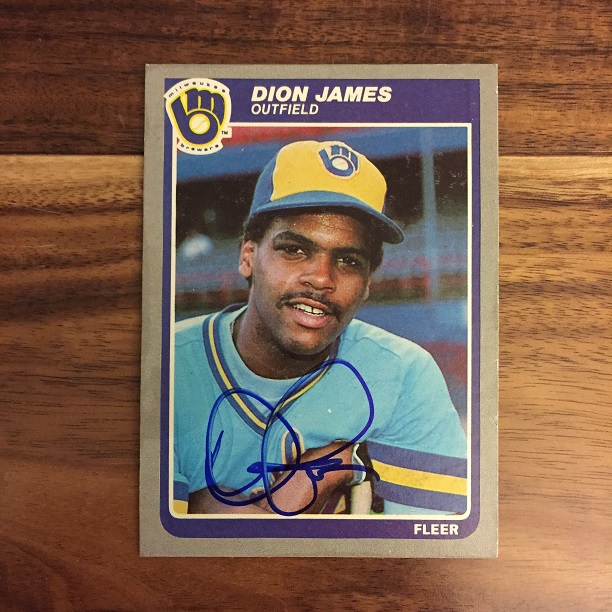 Interactions like this will always make me a fan of a person for life! He was really nice when we asked him to sign and I would have been happy with the ball. The fact that he give us some of his own cards and signed them for us is above and beyond anything I could have expected. Thank you so much Dion for the experience! I will always remember it!