After only 3 starts Oakland’s No. 2 Prospect, Jesus Luzardo, has been promoted to AA Midland RockHounds. During his brief stint with the Stockton Ports, Luzardo gave up only 2 runs and 6 hits in 14.2 innings. He also struck out 25 batters and walked only 5.  In his last outing on April 17th he did not allow a hit and walked 1 in five innings against the Modesto Nuts. 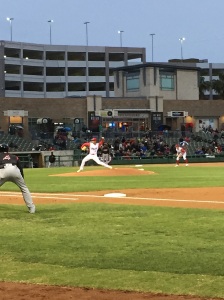 Luzardo’s first start with the RockHounds will likely take place on Tuesday at Corpus Christi. Right now Midland’s starting pitcher is listed as TBD for that game.

Luzardo’s promotion may seem fast, but he impressed many people during Spring Training this year. Luzardo pitched in 3 games, 2 as a starter. In those outings, he did not give up any runs, compiled a 2-0 record and earned a save in his lone relief appearance.

The top prospect is one of now four 20 year-old starting pitchers to make it to AA for the Oakland A’s in the past 20 years. According to Melissa Lockard (Twitter: @melissalockard) the most recent to do this were Rich Harden (2002), Trevor Cahill and Brett Anderson (both in 2008). Among this group Luzardo has the fewest Class A Advanced starts with 3. Both Cahill and Anderson had 13 starts each for the Stockton Ports in 2008. Harden had 12 starts for the Visalia Oaks in 2002 before earning his promotion.

Interestingly enough both Cahill and Anderson have rejoined the A’s for the 2018 season. Cahill made his first start in Oakland on April 17th. Anderson is pitching great in AAA Nashville with a 1.38 ERA in 3 starts while striking out 20 in 13 innings pitched.

The 20 year-old lefty was drafted by the Washington Nationals in the 3rd round of the 2016 Draft out of Stoneman Douglas High School (Parkland, FL). Luzardo was acquired by the Oakland Athletics with Blake Treinen and Sheldon Neuse (Oakland’s No. 11 Prospect) in the trade that sent Sean Doolittle and Ryan Madson to Washington.